Field hockey is one of the world's oldest stick games. There is evidence that game like field hockey was played as far back as 4,000 years ago in ancient Egypt. The sport got its current form in 19th century England. Several current stick games, such as ice hockey and ice ball, have developed on the basis of field hockey.

Field hockey quickly developed into an internationally popular sport, so it was obvious that it was included in the program of the Olympic Games in London in 1908. It has been a permanent sport since the 1928 Amsterdam Olympic Games. Women played for the first time on the Olympic field in the 1980 Moscow Olympics. The European championships of the sport started in 1970 and the world championships in 1971.

Field hockey is played almost everywhere in the world, in more than 135 countries and in Europe in more than 40 countries. In the early days, hockey's medal statistics were dominated by Pakistan and India, which still has the most Olympic medals. Nowadays, the sport is popular in many countries around the world. The top countries of the sport can be named, e.g. Argentina, Australia, Holland, Germany and New Zealand. 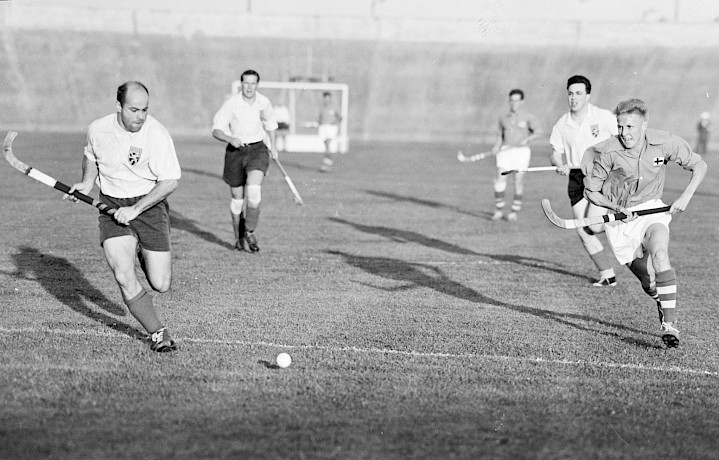 The Finnish national team played against Belgium at the Helsinki Olympics.

Field hockey first came to Finland in 1914 with Erik von Frenckell, who had studied in Germany. Women were the first to get excited about the sport. The civil war of 1918 and the years that followed interrupted the full enjoyment of field hockey in Finland. As the 1940 Olympics approached, von Franckell started introducing hockey to schoolchildren and soon matches between schools were held at the Töölön Ball Field, which was originally built as a hockey field.

After the Winter and Continuation War in 1946, playing field hockey was revived again by Wim van der Vlugth, the son of the Dutch ambassador. He got the Finnish Academic Sports Association (SAUL) interested in the game, and the visit of the Dutch club team De Batavieren in August 1946 sowed interest in field hockey in Finland. However, the sport was plagued by a severe shortage of fields, clubs, clubs and rules in Finnish. The shortage of sticks was eased by producing a trial batch of wooden field hockey sticks at Porvoo's canoe factory. However, the sticks were inflexible and shook in the hands when hitting the ball.

Finland's first field hockey club, Nuijamieht, was founded in 1949. In order to increase the number of hockey enthusiasts, with the upcoming Olympics in mind, the Finnish Field Hockey Association was founded in 1950. In the same fall, training matches between the clubs were already played, and the following spring, the association's official league activity, the Suomen Cup, began. The first clubs of the association were Hukat, HJK, Torpan Pojat, HPK and Nuijamieht. According to later, PK-35 and Rauman Lukko also came.

The Finnish field hockey national team participated in the Helsinki Olympics in 1952. The team, created from scratch, lost to Belgium in the opening match 0-6 and was eliminated from the other games. With the Olympics, Finland was accepted as a member of the international hockey family. With the Olympics, hockey took root in Finland, but despite the Olympic status, the sport has not grown very big and the championships are still held between a few enthusiastic teams. There are less than a thousand registered players in Finland. The focus of the sport is in southern Finland, where most of the teams are. The northernmost field hockey location is Seinäjoki. Humppila, Urjala and Vantaa have emerged as the newest field hockey locations

Finland has actively participated in the sport's international activities, and already in the 1950s Finns traveled to Europe several times to play. Finland's national teams are lower than the European middle level. Finland has also organized a few international tournaments in home arenas. In addition to the Olympics, the Finnish Hockey Federation has organized the sport's Nordic Championshi competitions in 2000 and the men's European Championships (IV level) in 2019. In addition, the association has organized the men's indoor hockey European Championships in Vantaa in 2016 and the Helsinki-based ABC-Team EuroHockey Club Challenge for club teams (men's level IV ) tournament in 2018. In the summer of 2022, the European Championships for men under the age of 20 was held at the Velodrom in Helsinki.