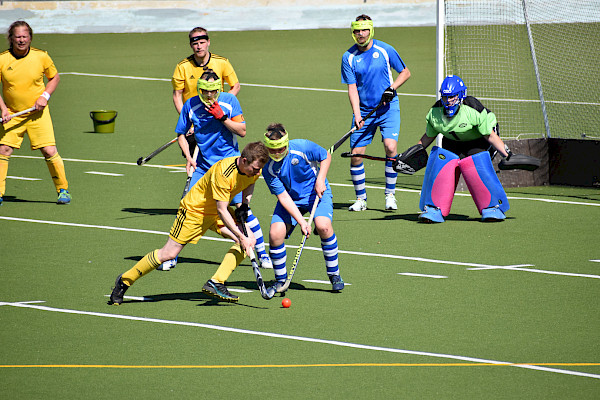 Field hockey is played on an artificial turf field. There are eleven (10 + goalie) players from both teams on the field at the same time. Field hockey can also be played appropriately with other numbers of players (e.g. hockey9).

The field is 91.4x55 meters in size. The field is marked with a halfway line and quarter lines, as well as a goal circle. The radius of the goal circle from the goal: is 14.63 meters.

The official playing time is 4x15 minutes. Tournaments can be played at different game times. Back and forth exchanges are allowed.

Field players may only play the ball on the straight side of the stick. You may not touch the ball with your feet or other parts of your body. The stick may only be used to play the ball, i.e. hitting the opponent's stick or body is prohibited. An accepted shot leading to a goal must originate from inside the goal circle.

Dangerous playing is prohibited in field hockey. For example, a ball raised above knee height towards the opponent, a ball kicked by the goalkeeper that rises dangerously, and a ball raised into a crouded area are considered dangerous. In the hitting situation, the stick may rise to the level of the shoulder.

Special situations are important in field hockey. A penalty corner or short corner is caused by a foul by the defending team inside the penalty area or a deliberate foul inside the quarter line. A short corner is awarded 9.1 meters from the goal post. All players are outside the ring. The ball must be stopped outside the ring before the goal shot. In the short corner, the defending team may only have four field players and the goalkeeper behind the goal line. The rest of the players are on the center line until the special situation has started.

A long corner is created when the ball unintentionally goes over the end line from the stick of the defending player. A long corner is given from behind the quarter line, from where the ball has gone over the end. Positioning of players is free, but other players may not touch the ball until it has moved 5 meters. A free kick is always given from the point where the foul occurs.

A penalty shot comes from a deliberate foul by the defending team that occurs inside the penalty area. The penalty shotis is hit from the spot 6.4 meters from the goal. The goalkeeper must stand with both feet on the goal line and must not move until the shot has been fired.

In a match that ended in a draw, where the winner is to be decided, a penalty transport competition (shoot out) is used. In the penalty shoot out, the coach/team manager chooses three players who take turns to take the transport ball against the other team's goalkeeper. If the scores are equal after the first set of players, the same three players start the second round of transports. In the second round, the competition ends as soon as either team has received more goals allowed when both teams have completed the same number of tries. The ball is placed three meters from the border of the ring. When the referee gives permission, the player has six seconds to try to score. 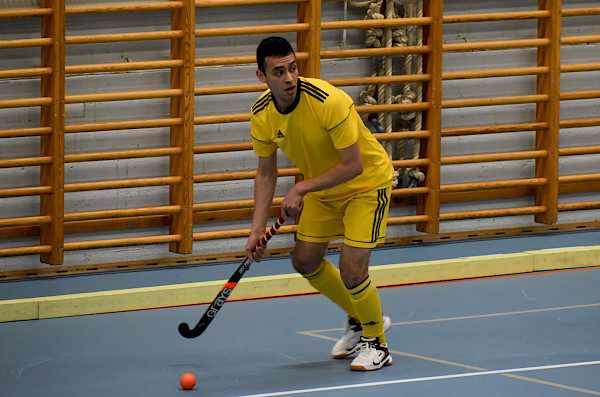 Indoor hockey as developed for sport halls, was originally born as a form of field hockey training in countries where it is not possible to play on outdoor fields in the winter.

Nowadays, the sport is mainly played in Central Europe. The sport came to Finland in the 1980s and the Finnish indoor hockey championship was played for the first time in 1990.

Indoor hockey is played in sports halls. Handball goals are used as goals. There are low wooden boards on the sides of the field, which can be used as an aid when playing.

There are six players from the team on the field at the same time (5+1). The playing time in tournaments is 4x10 minutes.

Indoor hockey sticks are thinner than similar equipment in the outdoor game. The biggest difference to field hockey is that the ball cannot be hit on the field, but it is swept along the floor. When attempting a goal, the ball may be tipped inside the ring.

You need a stick and a ball to be able to play field hockey. The stick is about a meter long, with a curve at the bottom. The blade or hook of the stick is always flat on the left side and convex on the right. All sticks are therefore "righties", regardless of whether the player is right- or left-handed.

The ball is made of a hard material, mostly plastic, and weighs 160 grams and has a circumference of 230 millimeters.

In this sport, it is recommended to use shin guards and mounth guards. The right hand (or both hands) may have a glove to protect the fingers. In short corners, players can use a protective helmet.

In matches, the team's uniform is worn, which consists of a jersey, knee socks and shorts or, for women, a skirt. The shoes are chosen according to the game platform. When playing outside, it is recommended that the soles of the shoes have studs or a strong pattern (cross-country/artificial grass shoes). Indoor shoes are used inside. The shoes designed for field hockey have reinforcement that protects the toes. 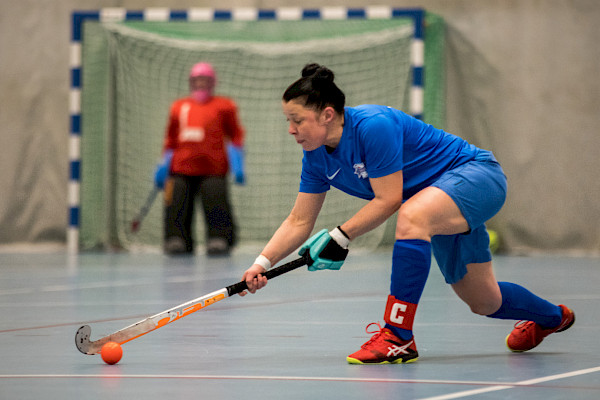